Last time we checked in, Lucky had just gotten chest x-rays in December where we found out that he was 6 months met free with Palladia. Not a spot to be seen. Well, a few weeks ago Lucky started getting an occasional gagging cough. It had happened a few times before, and we figured that either he had picked up a mild infection or he was having some throat irritation due to his being intubated 3 times in the past year. We had our vet check it out as well as Dr. V, and everyone said that it seemed like an upper respiratory tract thing, since his lungs sounded fine. But we took him off palladia for a couple of weeks while we gave him some antibiotics to not overwhelm him with drugs.

Well, on Friday Lucky was due for another chest x-ray session. We were totally blindsided when we saw a HUGE met in his lungs. About softball sized. Dr. V talked to us about how this met was probably a palladia resistant group of cells that had just been biding their time and had started to expand very rapidly. Needless to say, it was a very rough weekend. We didn’t tell Lucky about it though, so he had a great weekend! He got to go to the beach at Fiesta Island, on a picnic at the park, and he got to eat pretty much anything he wanted all weekend! He’s such a happy puppy, full of energy and love. 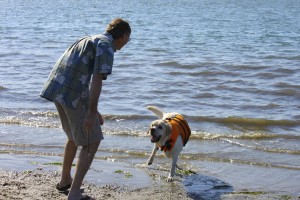 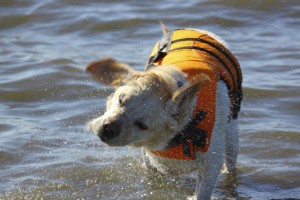 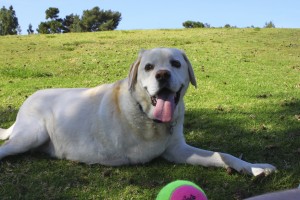 Now for our dilemma. Of course the quality of Lucky’s life is way more valuable than quantity, and we would never want to see him suffer at all. Right now, I feel like that is definitely the case. Other than his occasional coughing, Lucky is living it up and he’s just as happy and full of energy as ever. Dr. V’s take on things was that Palladia is one of the best drugs out there, and so if Palladia isn’t working then probably nothing else will. However, with the miracle we saw in the past with his tumors decreasing in size/disappearing with Palladia, I can’t help but wonder if there’s something we can do to attack this tumor and get it to shrink/slow down. In some online research, I’ve come across Masitinib (also called Kinavet) as another recently approved drug that has shown some really promising results. I know that this drug targets a lot of the same pathways as Palladia, and I’ve seen at least one reference online that indicated it might be useful in palladia-resistent tumors. I know that I’ve seen some dogs on Tripawds that have used Masitinib, so I’m trying to look around and see what people’s experiences have been with it and if anybody knows anything more about it, particularly in relation to palladia and palladia-resisitent tumors (I know, that’s very specific information that might be hard to come across).

Anyway, we’ll be talking to Dr. V this week about the possibility, and we’ll let you all know what happens with it. We’re going to keep our fingers crossed for now.

Hi all, this news is a few weeks overdue, but Lucky had his most recent chest x-rays on December 16th, and his lungs were still completely clear! We feel so lucky to have had this amazing result and hope that Palladia, which has been a miracle drug for Lucky, also works just as well for others out there! This visit to Dr. V was especially exciting since, with 6 months of clear lungs, we will be going off Palladia in a couple of weeks. We’re very excited to get Lucky off drugs, because even though he hasn’t experienced many side effects at all, it seems like the Palladia does make him a little bit tired sometimes. We’re also crossing our fingers that we won’t see anything come back up after Lucky stops his drugs.

We’re almost 11 months post-surgery, and every single day we’re reminded how lucky we are to have our best friend with us, and going strong! Here’s to another great year with Lucky ahead!

Here is a summary of everything that has been going on with Lucky over the past few months (since out last check-in with Tripawds!).  Lucky was on a chemo trial when his follow up chest x-rays were done in May.  Unfortunately they showed multiple spots of lung mets and he had to be pulled from the chemo trial.  He was then started on Palladia.  We also tried cytoxan and lasix, but he got too sick from the cytoxan and we ended up going solely with the Palladia.  He had more follow up x-rays in July.  We were bracing for the worst, but……his x-rays were totally clear!  No signs of any mets to his lungs.  Evidently unusual to see, but we were thrilled!  We held the course with the Palladia, which he tolerated fine.  Then in late September we noticed a lump on his left rear flank.  They did a needle biopsy, and it was positive for soft tissue sarcoma.  We scheduled surgery to have the lump removed (a piece of cake after you’ve been through an amputation!) and were happy to get the report that there were clear margins all the way around the lump.  So he is quite a sight now with his tripawd status as well as his new battle scar on his left rear (approx a 6 inch incision which has healed nicely).  So that’s all the medical stuff – on the social side, Lucky is doing fantastic.  Loving the beach, camping parks, etc, etc.  He is as happy as ever, wagging and wiggling with excitement around everyone and everything.  What a high quality of life he is enjoying!  We are happy to share this positive experience, because as you can tell from reading our previous posts there were many tough times. Now looking back, we have absolutely no regrets about Lucky’s surgery and treatment! It’s amazing to think that it’s only been 8 months since Lucky’s surgery. He seems happier than ever, and we are so appreciative of every day with our best friend!

Well – 2 months plus 2 days! It’s hard to believe it’s only been 2 months since Lucky’s surgery. He is doing absolutely great! He had his third dose of Carboplatin last week – no side effects for any of the doses. His hair is almost all grown in, and he is happily hopping and running on a daily basis. He will have his follow up chest x-ray with his 4th dose of chemo on May 4 – keeping our fingers crossed! It is so amazing to see the progress after those first couple of tough tough weeks. Lucky is on no medication at all (has been off everything for quite a while). He made an appearance at the relay for life on the UCSD campus this past weekend (unofficial visit – no dogs allowed on the track) and was very happy to see all the wonderful work being done towards finding cures for cancer!

Things are going well – Lucky snuck up the stairs by himself twice today when we weren’t looking!!!  Coming down is a different story – waits for the ‘ole Ruff Wear Harness for the trip down!  Had a CBC done today to catch the low point of the WBCs after his first Carboplatin dose last Wednesday – hopefully we’ll have the result tomorrow.  Continuing to show more strength and stamina day by day, hair continues to grow – yeah! Doing well on his 200 mg daily dose of Gabapentin – getting ready to take it down to 100 mg for week 4.  Appetite is great – amazing to see everything “normalizing” this week!

Wonderful weather, great walks, lots of tail wagging – overall a great weekend!   Lucky loves his Ruff Wear Harness – jumps up whenever we bring it to him because he knows something fun is going to happen (a walk, a trip upstairs, etc)!  Also started using his “bean bag” dog bed this weekend!  We had bought a more firm, thinner type of bed for him that he used for the first couple of weeks, but brought his old bed back into the family room and next thing we knew he was all snuggled on the bed looking comfy and cozy!  Looking forward to a “boring” week – one blood draw scheduled for Wed but no other major appointments!

A big sigh of relief that the first 48 hours post Carboplatin went smoothly – great appetite, no GI problems!  Still resting a lot and loves to lie in the garden/woodchips!!! (Must be that connection with nature that many others have described). Seeing more of Lucky’s “old” personality every day!  Nice to know from others that he may experience a couple of “energy dips” between chemo doses – it’s so helpful to know what to expect!  He’s scheduled to have a WBC check in 7 days – we’re told that is usually when the biggest drop occurs.  Looking forward to a great weekend!

Had a busy 2 week ampuversary today! The stitches came out – one more goal achieved- and had the first dose of chemo. Didn’t feel up to a “Frosty paws” treat after the chemo, but was up for some roast beef slices and that good ole Velveta tonight! Going to try “weaning” the Gabapentin, going from 300mg to 200mg per Dr. V. Keeping our fingers crossed those phantom episodes are gone for good! What an exhausting day – looking forward to a great night’s sleep!

Lucky’s slowly but surely making his way closer to the 2 week mark!  It’s nice to see hair starting to grow back – hopefully it won’t get in the way too much when the stitches are removed in 2 days.  Gabapentin is still keeping him pain free which is fantastic!  He seems to be getting a little stronger every day – on his walk tonight he didn’t lie down in the neighbor’s yard to take a little rest on the way back – he even had a little “jog” going on for the trip back home!  He’s only going a couple of blocks, but he seems very excited to be getting out and about.  I think someone else talked about the virtue of patience in their blog – it really does take a big dose!  You want so much to see them back to their “old self” that it’s sometimes difficult to slow down and appreciate each small step forward.  Still loving the Velveta!!!!!!!!

Not a whimper of pain since starting on the Gabapentin 300mg the evening of day 7! (Velveeta worked like a charm for the second evening in a row – what a relief!) One thing we just thought about today – it sounds like some dogs have experienced leaking and oozing from their incision sites.  Lucky’s incision was closed with sutures (versus staples) and he has experienced no leaking at all!  The incision looks great, and the sutures are scheduled to come out on day 14 (when he goes in for his first chemo treatment).  He went out for a couple of short walks today which he really seemed to enjoy, and went up the stairs (12 steps) to the second floor  tonight without any trouble!  Lucky is still sleeping a fair amount and not quite back to his happy-go-lucky personality, but we are thankful he is now comfortable and making progress each day.  It is so helpful and reassuring to read through everyone’s experiences!  Thank you to everyone!